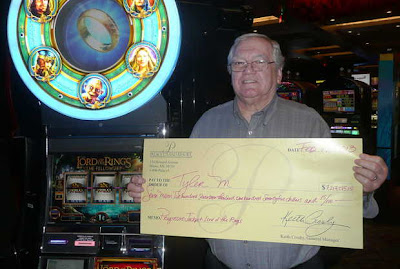 "A Michigan man who played penny slots after his friend's funeral Friday hit a $7.2 million progressive jackpot at the Palace Casino.
Tyler Morris of Montague won $7,217,175.15 playing The Lord of the Rings: The Fellowship, said Lisa Quirch, Palace Casino advertising and PR manager.
Morris typically plays craps, but felt compelled to try his luck on the penny slot machine in memory of a friend whose funeral he'd attended earlier in the day, she said.
Morris' friend enjoyed playing penny slots at the Palace, so chose to go there, Quirch said.
He hit the jackpot between 10 and 10:30 p.m.
"Tyler said he felt his friend was watching over him and had blessed him with the big win," said said."
http://www.sunherald.com/2013/02/16/4473261/memorial-south-mississippi-casino.html#storylink=cpy