In my post
Neuromancer, Pirates, Pearls and Lightbulbs???
I talk about my day trip to the Q1 building, on Queensland's Gold Coast and most of the synchros I had on that day.
But there is one that has just come to light for me today, while reading The Aquarians, by Eric Rankin. 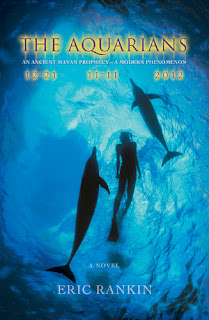 Author Eric Rankin Talks About Authenticity & 2012
First, just let me backtrack a little.
I took that picture (above) on the the 77th floor, showing the elevator floor indicator, not only because it showed how many floors were in the building, but because it reminded me of a digital clock face, with the red numbers.
Only I've never been too interested in 7's that much, showing up on clocks.
The only numbers that give me that otherworldly feeling is 11:11.
Yet I had this nagging feeling to take that photo because of the 11:11 sequence that I way too often see on clocks.
I've since found out that 7 is my life path number, and oddly enough I bought this key-ring (below) with the seven, eight, diamond, dice, horseshoe and clover on it, at the 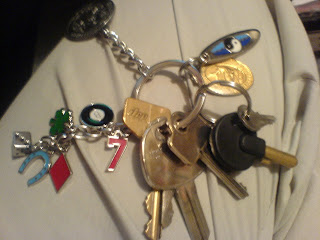 same store that I found the lorikeet figurine which sits next to my wife's photo of her father.
My car's random series number-plate just happens to have 878
(adds up to 23, my birth-date) as the number sequence on it
(plus the diamond shape), which I hadn't taken much notice of until after I had bought the key-ring.
But getting back to The Aquarians, I was up to the part in the book where Ixchel's father was giving her a birthday present,
which was a digital clock with the numbers preset to 11:11, because it hadn't been used before.
When he gives her the clock and she sees 11:11 on it, she says,
"Where was it made?", and he says,"The united States".

Then she replies,"And in the United States, they keep time with Mayan numerals?"
He laughs,and says,"No, my child, they do not use Mayan numerals there. Only at 1:11 and 11:11 would this clock ever look Mayan. But now that you mention it, it is quite a coincidence that it would come to us displaying those numbers, isn't it?"
When I looked up and saw that the paragraph was written on page 77 of this book, I remembered the photo I took at the Q1 building, and how I could not stop thinking about 11:11 while I was taking it.
Some synchronicities only become apparent days, weeks, months, and sometimes years after.
Posted by Brizdaz (Darren) at 5/25/2011 05:20:00 PM