Taking a Stab at It

Over at Synchrosecrets there is a story about Jeff Lindsay
(the author of the Dexter books) and the knife-block that he has on his kitchen bench.
A Stabbing Synchro
I was saying how I once had a similar styled pencil holder on my desk, which consisted of the pen/pencil holder ('Dead Fred', or maybe 'Dead Darren' in my case) and an IKEA pencil inserted through the heart (which I had to assemble myself;-)
Jeff said the knife-block was symbolic of the fact that he saw it right after getting his first royalty cheque  from Showtime, for the TV show that was based off his Dexter novels.
My pen/pencil holder was also symbolic to me for reasons I won't go into at the moment, but anyone who has read through this blog, could probably read between the lines, without me having to spell it out for them.
I'm not a fan of the Dexter novels (not that I have read any), but my youngest son is, and he has quite a few Jeff Lindsay novels, along with Stephen King novels, sitting in his bookcase.
When Jeff was out here at The Brisbane Writers Festival, I took both my boys to hear him give a talk about his novels, and to give my youngest son an opportunity to get Jeff to sign his Dexter novel.
Jeff Lindsay and Stephen King have been a big influence on my youngest son's ambition to write novels himself, and he has just self-published his first novel called Teen Assassin (I haven't read it yet) which will be available in bookshops soon.
Doesn't really look like my cup of tea, but then neither do the Dexter novels and half of Stephen King's stories, but it doesn't stop them from laughing all the way to the bank.
A least they're taking a stab with their story writing, while I feel
too much is at stake with my day job, to have a stab at doing something a little more creative for a living, at the moment;-) 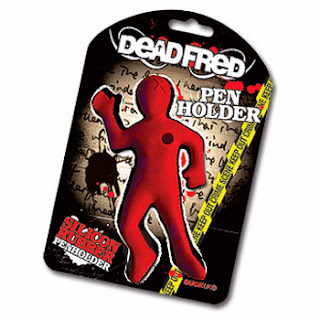