Behind the Door at Byron Bay

If you look through the program on the
Byron Bay Writer's Festival site for Friday 5th August, 2011, you'll see;
In search of soul: The Celestine Prophecy : James Redfield in conversation with Maggie Hamilton
2.15pm - 3.15pm
But that never took place because:
James Redfield has had to cancel his trip to the Byron Bay Writers' Festival due to an infected spider bite, which has escalated into a staph infection.
But that didn't happen until after I had seen the ad for the festival, the week before, announcing James's  participation and dreading that I had to work that weekend, and then my work approaching me to tell me that they would like me to take some long service leave, as they thought I had too much saved up after 23 years of service, me agreeing to take two weeks from that weekend, including the Thursday and Friday before that weekend, me buying a two day pass to the festival, then hoping to be able to get a motel room at reasonable rates two nights before, through the internet (which I did) so I wouldn't have to drive back to Brisbane, then back to Byron, and then back to Brisbane again.
The universe was opening up unbelievably to make this meeting between me and James come to pass, or so I thought, because a spider had other plans for James and our crossing of paths.
But everything was paid for, so two days at Byron it was, or lose a lot of money.
I had booked a balcony room for Friday night at the
Wollongbar Hotel 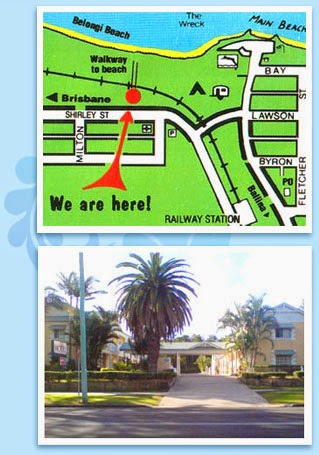 I had never stayed there before, so I thought being so close to the sea and having a balcony room that I would have a fantastic view of the ocean.
WRONG!
When I got the keys to my room I wondered how I was supposed to get to my front door and get in, as I could see no steps leading to the balcony.
The guy at reception said you have to go round the back and go in through the back door.
Which was weird. 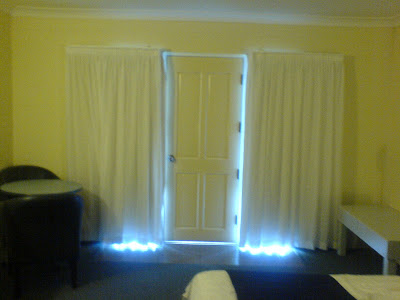 But this sight of the door as I entered the room reminded me of two doors I had seen somewhere before.
One in a dream in the middle of an open field, and the other on a book I purchased, read and had a lot of strange synchronicities with, as well. 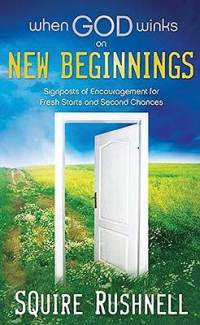 I had never seen a door positioned like this one before. usually there would be a sliding glass door or solid walls around the door, not glass.
I just love listening to SQuire tell that Emmett Kelly story in the YouTube clip above, it never fails to give me goose bumps.
Talking about James Redfield and Byron Bay reminds me of one of my favourite songs about Byron Bay, that was filmed pretty much outside this motel room, on the beach nearby, and the singer's name???
Robert James...not only that, but the sofa in the clip was purchased from where I work, so the odds are pretty good that I picked it from the warehouse for them.
Posted by Brizdaz (Darren) at 8/08/2011 10:46:00 PM

It certainly looks otherworldly with the sun behind it like that,but I can a sure you there was no poltergeist activity that night,the only difference in my nights sleep was the beautiful sound of the waves rhythmically crashing onto the sand outside.

To me it is,because if you walked out that door and kept going straight,you would end up a the Cape Byron lighthouse,which is about a mile up the road.