I never knew about these birds living in and around Brisbane until listening to a 'Conversations' podcast featuring Darryl Jones talking about his new book 'Curlews on Vulture Street' about a fortnight ago, but now that I have watched those You Tubes above to see just what an Australian curlew looked and sounded like I realize that these birds live in the bush nearby, as I've heard those screams coming from the bush near my home in the very early hours when I'm trying to sleep.
Not that I recall ever having seen them around my home though.
I haven't read any of Darryl's books yet, even though I have written about one of his books that I have been meaning to buy and read -
Darryl Jones: 'Birds At My Table' Podcast
I had planned on going to see his talk tonight in a bookstore just off Vulture Street until I saw a few days ago that the event was sold out.

Oh well, I have other plans now anyway and won't even be able to watch it over Zoom tonight.
ZOOM?
I had listened to the curlew podcast the Friday morning after it aired on ABC radio live and then read in a Brisbane newspaper that morning about the Netflix adaptation of the book 'Boy Swallows Universe' starting production in Beenleigh, which was just up the highway from where I spotted a blue fairy wren and its mate in a hedge outside of a six storey office building in Springwood that Friday. 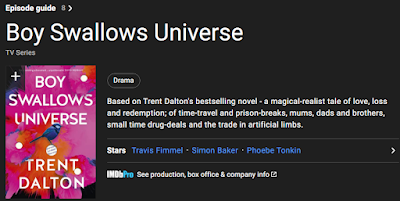 I hadn't seen a blue fairy wren in such a long time that seeing one in a garden outside an office building fronting the M1 freeway after reading about the Netflix series starting filming just a few suburbs down the freeway blue blew me away, pardon the pun ... kind of:-)
Considering I had bought that book from the same bookstore Darryl Jones is doing his sold-out book talk tonight:-)
Magic Words and the Power of Language?
I have to check out Wagga Wagga, the town Darryl grew up in next time I drive down that way now I know the name of the town means crow.
The closest I've been to the town was stopping in Gundagai -
The S#!+ You Learn on the Road to Gundagai
Posted by Brizdaz (Darren) at 9/14/2022 01:20:00 PM