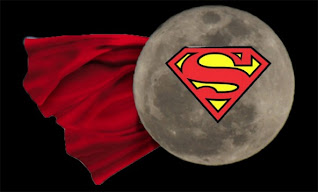 "A super-moon will rise above Australia tonight, creating an impressive view in the early evening sky and bringing a king tide.
The Moon will appear bigger and bolder than usual as it passes closer to the Earth just in time for a full moon.
Dr Brad Tucker from Mount Stromlo Observatory says the distance between the Moon and the Earth varies by about 50,000 kilometres, which creates the effect.
"Everyone thinks the orbit of the Moon is a perfect circle - well it's actually slightly elongated," he said.
"Because of this, at certain times the Moon will appear larger, and sometimes appear further away.
"A supermoon is when a full moon occurs when the Moon is at its closest approach to the Earth."
Mr Tucker says the most impressive view will be when the Moon is close to the horizon as it rises at dusk just after 5:00pm."
Supermoon appears in Australian skies, bringing king tide
Posted by Brizdaz (Darren) at 6/23/2013 05:06:00 PM