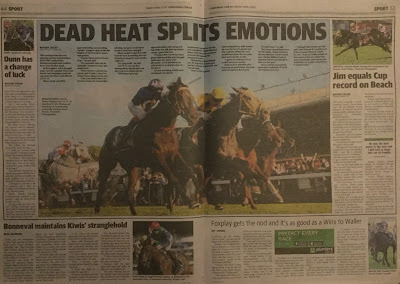 Saturday April 8th was my father's birthday, but it was the first year that he wasn't alive to celebrate it. 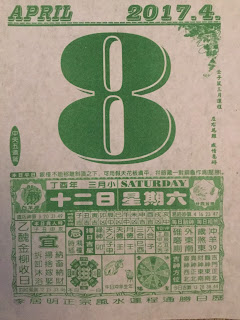 My Nan, dad's mother, also passed away on my father's birthday (April 8th) back in 1983
My Nan and my father were huge horse-racing fans and as a young boy I visited many a racetrack with them.
My Nan's favourite horse was a grey race horse named Gunsynd and I wrote about that horse in this post -
The Finishing Post: Goondiwindi Grey?
I was wondering on the morning of April 8th if anything was going to happen that day to remind me of my father, where I would be left scratching my head thinking it was more than a coincidence.
I wasn't really thinking in horse racing terms though, as I don't follow the ponies anymore, except on Melbourne Cup day in November each year for "the race that stops a nation". 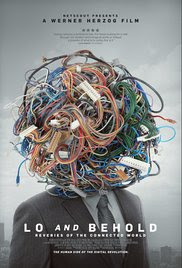 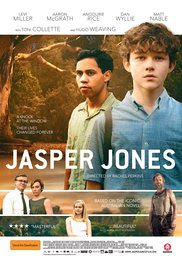 I went to the movies Saturday afternoon to see two movies which I wrote about here -
Lo and Behold, Reveries of the Connected World
So I didn't see any news stories until I got out of the second movie and the first news story I saw was this - 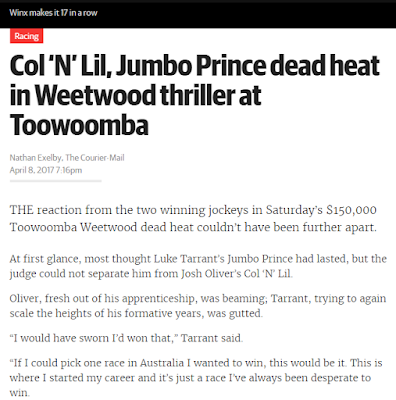 A dead-heat in the Toowoomba Cup, with one of them being a grey with a #8 saddle cloth and the other being #3?
My Nan died April 8th, 1983, 21 days before her favourite race horse, Gunsynd. 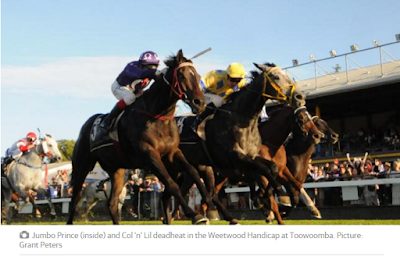 The thing is my father was born in Toowoomba and then grew up in Brisbane, but the Toowoomba Cup was my father's favourite race, as he won a heap of money on the winning horse Blueden in 1959, the year he married my mother, also. The weird thing also was that the number 8 horse was named 'Col n Lil' and while I don't know any Col, my Grandmother on my mother's side was named Lillian, but was often called Lil.
And this was the first time that there has ever been a dead-heat in the Toowoomba Cup.
And while the Toowoomba Cup result put a smile on my face, it turned out to be a dark day for horse racing on April 8th in other parts of the country. 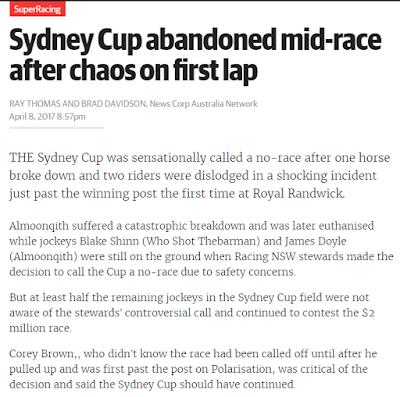 The Sydney Cup at Randwick was abandoned after a bad fall and on a personal note, my grandfather, father and myself all share the same middle name of Sydney.
Sydney Cup abandoned mid-race after chaos on first lap

And a jockey with the same first name as me was killed in another race fall in New South Wales.
NSW jockey Darren Jones killed in three-horse fall during Warialda Sprint

I should have known it was going to be a bizarre day soon as I left my unit complex, as I was trying to remind myself to head to the ATM near a Subway sandwich shop to get some cash out for the movies and as I'm pulling out of the driveway I hear Ryan Girdler on the local MMM radio station say I'm  just going to "subway" into this, instead of saying "segway" into this and then I saw a car on the road in front of me with the letters SUB *** in that order on its number-plate.
My favourite race horse was named Subzero and I won the most I ever have in one race when Subzero won the Melbourne Cup.
Subzero was a grey horse that won the Melbourne Cup with  #8 on its saddle-cloth.
I think I'll remember this April 8th for sometime to come.
Posted by Brizdaz (Darren) at 4/11/2017 01:03:00 AM