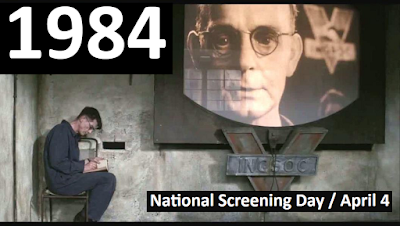 On April 4, 2017, almost 200 art house movie theatres across the country in 187 cities and in 44 states, plus five locations in Canada, one in England, one in Sweden, one in Holland, one in New Zealand, and one in Croatia, will be participating collectively in a NATIONAL EVENT DAY screening of the 80's movie 1984 starring John Hurt, who sadly died last month. This date was chosen because it's the day George Orwell's protagonist Winston Smith begins rebelling against his oppressive government by keeping a forbidden diary. These theaters owners also strongly believe in supporting the National Endowment for the Arts and see any attempt to scuttle that program as an attack on free speech and creative expression through entertainment. This event provides a chance for communities around the country to show their unity and have their voices heard.
Orwell's novel begins with the sentence, "It was a bright cold day in April, and the clocks were striking thirteen." Less than one month into the new presidential administration, theater owners collectively believe the clock is already striking thirteen. Orwell's portrait of a government that manufactures their own facts, demands total obedience, and demonizes foreign enemies, has never been timelier. The endeavor encourages theaters to take a stand for our most basic values: freedom of speech, respect for our fellow human beings, and the simple truth that there are no such things as 'alternative facts.' By doing what they do best - showing a movie - the goal is that cinemas can initiate a much-needed community conversation at a time when the existence of facts, and basic human rights are under attack. Through nationwide participation and strength in numbers, these screenings are intended to galvanize people at the crossroads of cinema and community, and bring us together to foster communication and resistance against current efforts to undermine the most basic tenets of our society."
Posted by Brizdaz (Darren) at 4/04/2017 10:50:00 PM