I went to the cinema for the first time in a long time Monday night to see the movie 'Free Guy' ... for free, because my youngest son was given an Event Cinemas double pass voucher that expires at the end of the month from a co-worker and wanted to know if I was keen to see a movie with him at an Event Cinema.
Wasn't much to pick from, but based on reviews we chose 'Free Guy' as it was FRESH on the 'Rotten Tomatoes' site (which must have been reviews pulled out of the RT freezer as far as freshness goes I think) and set our sights on the 5 pm session at the
Coomera Cinemas, as we had never been there before.  We got there right on 5 after having to take the back way through the cane fields because of a stand still on the free-way, probably a wet weather crash, because of a serve storm that was hitting the area as we tried to get to the undercover car-park before getting hit by hail or lightning ... or other cars that were trying to not get hit by hail or lightning:-)
This cinema complex had the biggest cinema candy bar I had ever seen in or around Brisbane ... and I failed to get a photo because we were rushing to grab a snack and get to our seats at the time.
Although I had to stop and grab a picture of whatever was happening in cinema 1.
Star Wars movie/s at an educated guess would you say?-)
Wasn't even a need to rush it turned out, as there were still a few adverts to go yet. I'm glad that I decided not to wear my sky blue linen long sleeve shirt that night like I was going to, as I didn't know before seeing the movie that the "blue shirt guy" is the hero of the movie.
That could have looked a little fan boy ... or at least stupidly ironic on my part if I had have worn it.
The only reason I didn't wear the blue linen shirt was I didn't want to get it wet in the rainstorm that hit just before we left my place.
I thought that Monday night at the cinema might be a little quite, but not completely dead.
Me and my son were the only ones in the cinema until the movie was about to start, and then four other people entered and sat down a few rows behind us ... which was a bummer, as we then had to put our masks back on:-( 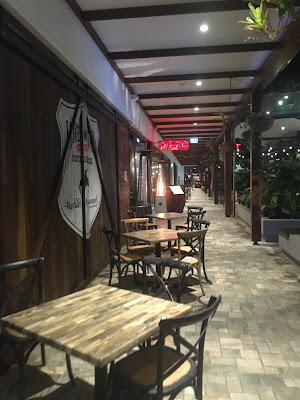 Even the food joints around the cinema were deserted when we came out of the cinema at around 7 pm.
Everything did not look awesome like in 'The Lego Movie' which is I feel what 'Free Guy' was trying to send up, but just in video game format rather than in plastic bricks, not to mention
'They Live', 'The Truman Show' and 'Groundhog Day' and maybe even a bit of 'South Park' thrown in with the Guy/Buddy routine, as well:-)
But I can't complain, since the movie was free, guy, right buddy:-) 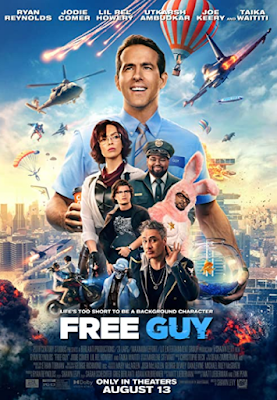 They Live ... in 'The Lego Movie'?
I had almost forgotten about reading months ago about the
Alex Trebek  GAME OVER cameo in 'Free Guy' -
I Want to Believe 2020 Isn't an X-Files Episode?
I've been waiting for a while for this movie to hit the big screen, as I wrote about seeing the movie poster in my 2020 post about
Bryan Cranston's X-File episode - 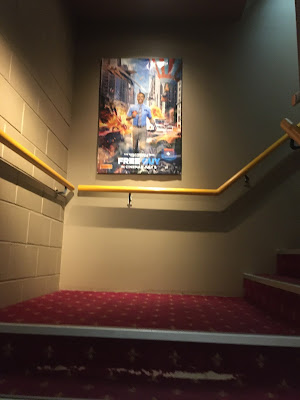