I listened to this two part 'Rejected Religions' podcast episode in the above You Tubes early this morning (but I listened through Apple Podcasts on my iPad) and found the discussion quite interesting and had a few synchs while listening along myself. 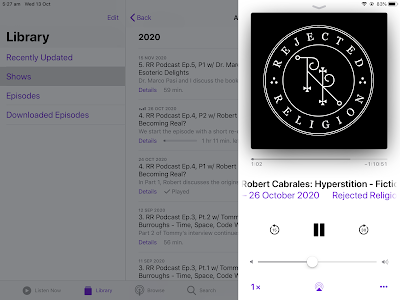 In Part 1, Robert discusses the origins of Hyperstition, and our
[not mine] old friend William Burroughs from Episode 3 joins us again, as Burroughs's ideas about Time and Control play an important role in this story. And, as with Burroughs, the use of magick to try to change reality is also important here, especially with regard to semiotics. Theosophy's theory about root races,
Aleister Crowley, and Lovecraft also get a mention. In Part 2, We start the episode with a short re-cap of the important concepts from Part 1. In this second part, Robert and I discuss how feedback loops work with the help of the film, The Sixth Sense. We also talk more about the difference between virtual reality and actual reality with the discussion of the concepts of re-enchantment and dis-enchantment. We also discuss how and why the Pepe the Frog meme was used by chaos magicians and others to attempt to influence
the 2016 US election. Robert brings up the topic of Bob Lazar (to my pleasant surprise [not mine]), and conspiracy theories are discussed in relation to hyperstition.
I must admit that while I find William Burroughs an interesting pop-cultural figure and find his "cut-ups" theory interesting, his two novels I have read in the past, 'Junky' and 'Naked Lunch' really put me off the guy and makes me think that the guy is little more than a low life selfish scumbag ... in the same league as Crowley pretty much.
Listening to Tommy in this You Tube below does nothing to change my mind, either.
CuT uPs, wiLLiAM.s.bUrROuGHs aND nAkED LUnCh
William Burroughs appears near the end of U2's music video
"Last Night on Earth", pushing a shopping cart with a large spotlight positioned inside it.
The video ends with a close up of his eyes.
I must admit that I find that rather surprising, not that I'm into much of U2's music since this century began.
As I'm looking into U2's songs around the time of
William Burroughs last appearance I noticed that the single 'Elevation' turned 20 in 2021, and the album it came off turned 21 this year.

And considering what happened in New York back in 2001 watching the official 'Elevation' music video below is rather a bit eerie, I think, considering how a plane bookends the video ... and is that an elephant in that video flying around Bono?-) 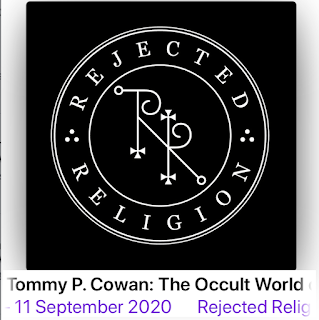 Would this BTTF film below be an example of hyperstition?I was surprised to hear that Burroughs was interested in
Whitley Strieber's book 'Communion' and Strieber's visitor experience. 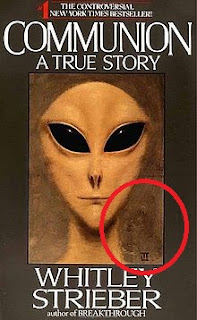 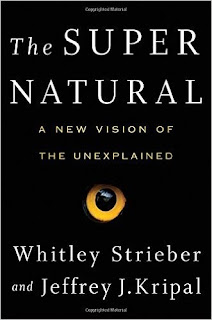