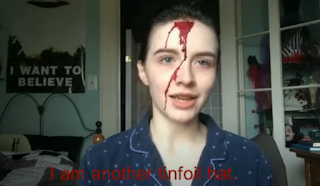 After writing my recent 'Talking Weird' post up which featured Zelia Edgar I went over to her 'Just Another Tin Foil Hat' You Tube channel and watched a few videos about subjects that took my fancy, but I noticed that in some You Tubes Zelia's eyes seemed to be green (like my eyes:-) and then they would appear dark brown to nearly black (especially when not wearing her glasses) , and I wondered what was going on? Hmm ... good movie I think too, by the way -
The Babadook ... or The Red Book?-)
I
I figured that when Zelia is not wearing her glasses that she is probably wearing contact (pun intended there:-) lenses and that when she is wearing glasses that is her true eye colour ... which to my eye looks green ... and you know what they say about
green eyes, don't you?-)
Then maybe I should be wearing glasses and a tin foil hat while watching her You Tubes and suggesting such a crazy things?
Green Eyes, a Marker of Alien Hybridity?!
Is the Kid in Close Encounters Meant to be a Hybrid Alien?
Posted by Brizdaz (Darren) at 5/31/2022 02:30:00 PM