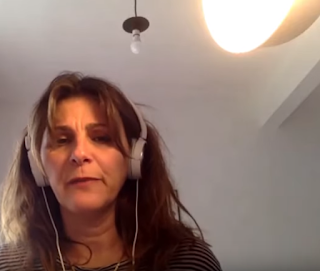 Ali was already a natural born medium.
But, after Romy's passing, Ali lost belief in all things spiritual.
In this interview and in her book Ali tells of this journey from belief to the loss of belief back to knowing that her daughter Romy is still part of the family along with her husband and her three other children.
Ali's experiences with Romy have been verified by other mediums who have connected with Romy. Ali's book is 'The Truth Inside' It's available from O books and on Amazon."
When Ali mentioned being from Brighton I couldn't help thinking of the two Nick's that I know live in Brighton, Nick Cave (not that I know Nick Cave personally though) and my old sync-head mate Nick who goes by the name DJ name PsoNik.
I've never been to Britain, but if I ever do go I'll be heading to 'The Duke of York's' cinema in Brighton to watch a movie.
I wrote about the 'Duke of York's' cinema early last year on
Heath Ledger's birthday in this old post -
Happy Birthday Heath Ledger and Put on a Happy Face? I remember reading that David Bellamy was from Brighton also -
Oh, Poppycock!?
I also wrote about the passing of Bill Heine who was the 'Duke of York's' cinema owner at one stage -
A Synchromystic Conversation with Actor Winston Duke About His Role in Jordan Peele's New Horror Film Us? "Queenslanders have been advised to “stay in your state, stay in your suburb” but by-elections and council elections will still go ahead."?!
Posted by Brizdaz (Darren) at 3/25/2020 06:49:00 AM

Thanks again for the podcasts that you link to. I think it is super nice of you to loan me your search skills and discernment.

I should say give cuz I can't return your ideas!

Yeah, 'Grief 2 Growth' was certainly a good find on my search Delorus.