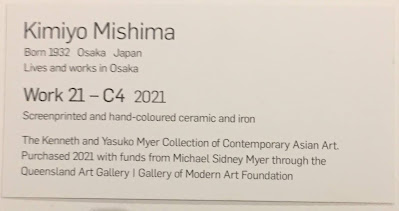 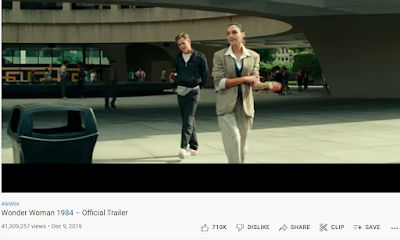 I couldn't help thinking of the scene from 'Wonder Woman 1984' when I saw Kimiyo Mishma's Work 21 - C4 2021 on the same visit to the Queensland Gallery of Modern Art last month I wrote about seeing a snowman and a creepy alien like hybrid statue in the courtyard -
The Visitation?
To be honest I did actually think Work 21 - C4 2021 was just a couple of old trash cans kicked in by the artist and then filled with cans and flogged off as art to QAGOMA for $$$$$$.
But no, as I was soon informed by the gallery attendant/security guard/Wonder Woman when she came over to me when she saw me taking photos of the work (an artwork which I had intended to take the piss out of, much like I'm doing now, for a post much like the one I'm writing here now:-) and told me that they were ceramic works of art, not aluminum cans, as they appeared to be.
I said, "so they are all ceramic works in those bins?" to which she informed me they were.
Which was rather embarrassing when I had to sneak back later when she wasn't watching and remove my Coke can I had placed in the bin thinking it was a can collection point for the
art gallery:-P
Only joking, I'd never get a can past her, never-mind trying to fish it out from under her if I did.
And if I don't come clean about it now, she might hunt me down with her lasso of truth and make me retract my can fantasy to my readers ... OK ... reader:-)
But I'm not lying about my review of how trashy
'Wonder Woman 1984' was when I wasted good money to see it on a cinema screen - 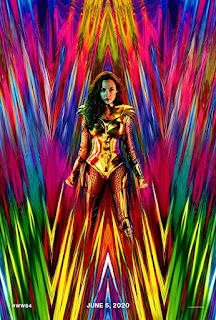