Just How Random is Getting Struck by Lightning ... While Holding an Umbrella?

I had only just listened to a new 'New Thinking Allowed' podcast episode featuring a lady recounting her story of being struck by lightning while holding an umbrella and then I watched the evening news to see footage of  a security guard holding an umbrella and being struck by lightning and surviving ... and I said to myself, what are the odds of that happening?-) 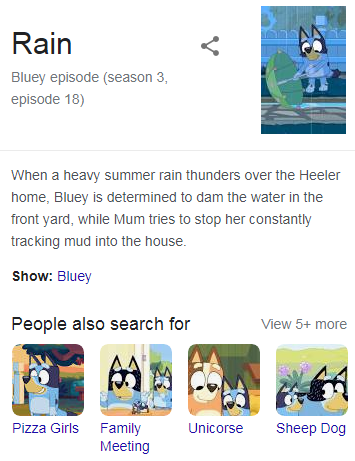 I watched a few new episodes of 'Bluey' last week and there was one titled 'Rain' where it starts raining and Bluey goes out to play in the rain and Bluey's mother gives her an umbrella to keep dry:-)
I guess we have to assume that it was just a heavy shower and not a storm?
Otherwise giving a kid an umbrella to play in a storm seems a little bit more controversial than a pass the parcel game:-)
Suck It Up, Because It's All Part & Parcel of Pass the Parcel?
Posted by Brizdaz (Darren) at 12/30/2021 01:04:00 AM