New Thinking Allowed: The Power of the Near-Death Experience? 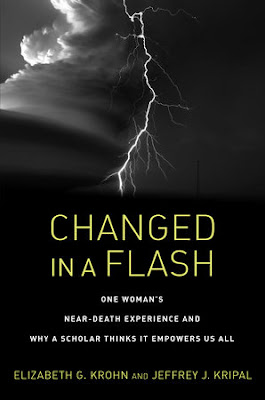 "Elizabeth Krohn is coauthor, with professor Jeffrey Kripal, of

Changed in a Flash: One Woman's Near-Death Experience and Why a Scholar Thinks It Empowers Us All.

Here she describes how her life was changed dramatically in 1988 when she was struck by lightning.
Prior to that time, she describes herself as a conventional Houston, TX, wife and mother of two young children.
She had no interest whatsoever in the paranormal.
Although she was unconscious only for a matter of minutes, for her it seemed as if she was in a heavenly garden for two weeks.
Subsequently, she began experiencing precognitive dreams and other psi phenomena."
Changed in a Flash?