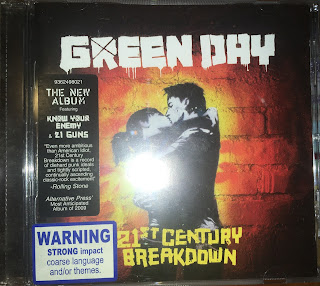 I was going through my CD collection deciding what to keep and what to give away, and I found a CD that I didn't even know I had bought.
'Green Day''s '21st Century Breakdown'.
I put it into the CD player and listened to it for probably the 2nd time since I had bought it, and I couldn't help thinking it was written for 2020 with all that's happening in the "fake" news this year;-)  "At the beginning of the century, the compact disc was the standard form of music media, but alternative forms of music media started to take its place such as music downloading and online streaming.
A slight resurgence in vinyl records started to take place in the 2010s." "The 21st (twenty-first) century is the current century of the Anno Domini era or Common Era, in accordance with the Gregorian calendar.
It began on January 1, 2001, and will end on December 31, 2100."
Or if not sooner by the way it's all going for us humans:-( I think I might keep that CD ... for a little while at least.
RUOK in 2020, or Feeling KO-ed?
Posted by Brizdaz (Darren) at 9/12/2020 05:53:00 PM