Jack Hunter/s and Talking with the Spirits? 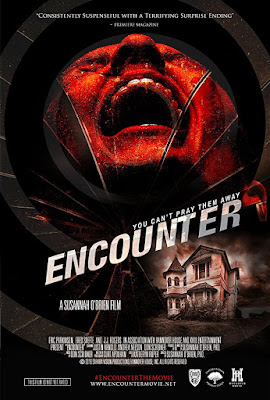 I recently listened to two podcasts at the 'Rune Soup' blog, one was the above podcast with a guy named Dr. Jack Hunter -
TALKING ANIMISM AND THE ANOMALOUS | DR JACK HUNTER 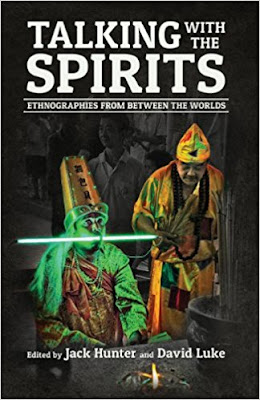 Jack is the author and/or editor of
'Talking With The Spirits, Strange Dimensions, Why People Believe in Spirits, Gods and Magic, Damned Facts' and the recently published 'Engaging The Anomalous'. 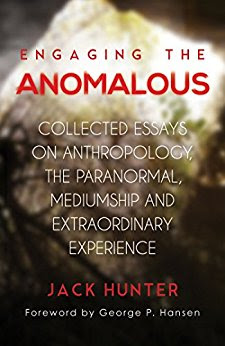 The other one was a talk about watching movies about spirits -
TALKING SPIRITS ON FILM AND TV WITH JULIO CESAR ODY
I wrote a post about listening to the 'Rune Soup' podcast about movies and the movies and shows that I watched afterwards -
Rune Soup: Talking Spirits on Film and TV 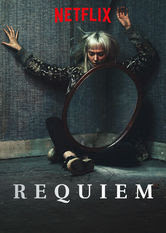 That turned out freakier than the shows that I watched, in hindsight.
But it was when I was doing an internet search for "Jack Hunter" to find (I typed in "fins" instead of "find" by accident right now, too:-) out more about Gordon's last podcast guest I stumbled across an actor named Jack Hunter (oddly enough, right?-) and found out that one of his movies on his IMDB page was the above one called 'Encounter'. 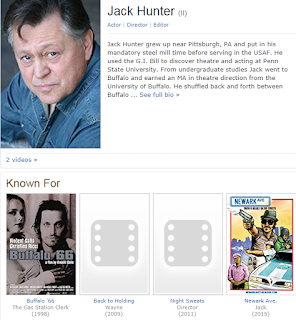 This movie 'Encounter' has an interesting plot on paper, too -
"A newlywed couple Ted and Lauren rent an old farm house to do a thesis on orbs and set up cameras, Strange ghostly noises and hauntings occur at night.
Ted sees video of Lauren, possessed and wandering the fields at night.
When their roommate kills himself they decide to do a séance to see what is haunting the house. Little do they know what they hear and fear is nothing they can pray away."
Gee, if Ted survived in that movie I think that he could give a really good TED talk about that encounter:-)
The actor named Jack Hunter also does skits for the 'Cracked' TV show called 'Honest Ads', which are really worth a watch, I think.
Many a true word is said in jest, as they say.
I've got to say that listening to Gordon's podcast with
Dr. Jack Hunter once more that Gordon did mention flooding in his speech quite a lot.
A Cascade AND Rabbits?
Hobart weather: Record rain, flash flooding inundate CBD and parts of southern Tasmania 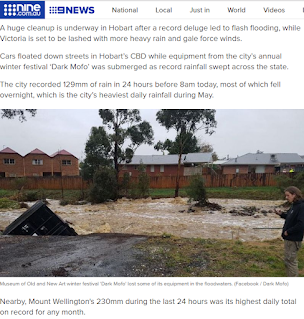 It was an interesting week for sure last week and it wasn't even shark week ... was it?-) 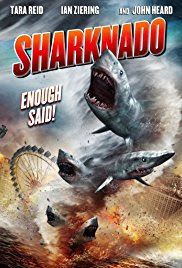 How 'Jurassic Park' technology could bring back extinct Tasmanian tiger
"Scientists in the US are using a DNA tool, known as CRISPR, to recreate the iconic animal’s genetic blueprint.
University of Melbourne associate professor Andrew Pask described the procedure as “complicated” and “exactly the same technology” as in the Jurassic Park films.
“Basically, you can take the DNA from a closely related living species and you can make all the edits that you see and all the differences you can see from a thylacine genome and put them into the living marsupial species genome,” Professor Pask told Sunrise.
“Rather than it being science fiction, which was when the book (Jurassic Park) was written, it is now becoming science fact.”
Professor Pask said teams in the US were making a lot of progress with the mammoth genome and could have an elephant-mammoth hybrid in a few years.
He added the technology could be applied to a number of different species but the “thylacine is a great candidate” because “it’s a recent extinction event” and the habitat for it in Tasmania still exists." 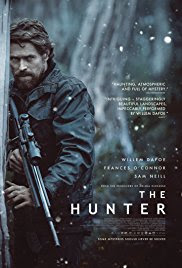