A Tragic Father's Day ... and Not Just Because My Footy Teams Seasons Came to an End in 2021? 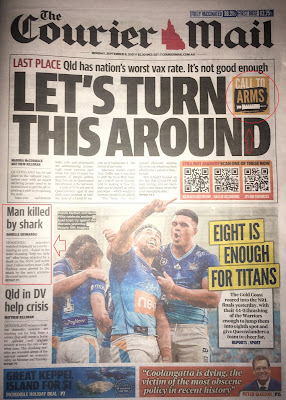 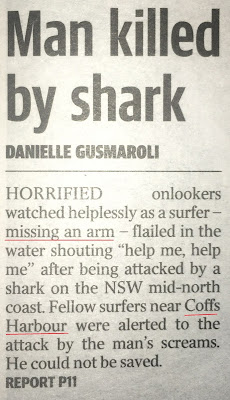 WTF?!
Being a Cronulla-Sutherland Sharks and Brisbane Lions member I couldn't help but read the Monday morning newspaper through a dark synchromyistic lens after both my teams bowed out of the 2021 football seasons in both major Australian football codes, the NRL and AFL, on the Father's Day weekend. 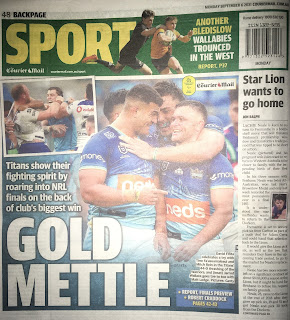 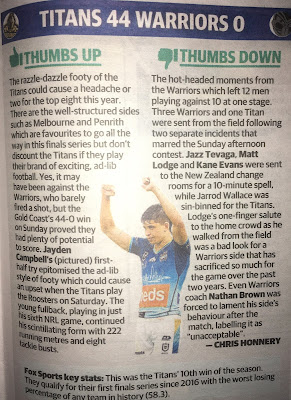 And ironically the Sharks had their season ended not just by
the Storm, but also by the Titans when they beat the NZ Warriors and jumped the Sharks into the Top 8 final positions on the footy ladder:-(
And my Lions got eliminated by one behind (a single point) by the Western Bulldogs, while this ar$eh@le pictured below celebrated the occasion, because that's the team he supports;-)
Go Take Another Hike Hemsworth!-)All that aside, I just couldn't believe that a young man (compared to me that is) lost his life in a shark attack on Father's Day, the same day that the Titans wrecked my day by jumping my team on the ladder and knocking us out of 8th place and out of the 2021 season.
I was planning on going down to Coff's Harbour with my youngest son to see our Sharkies play the Titans earlier this year, but because potential Covid border shutdowns and him not being able to get the weekend off work, I just watched the Sharks maul the Titans to the tune of 38-10 on my TV set at home in Brisbane instead.
So, what are the odds of a surfer dying in a shark attack in
Coff's Harour the day the Titans end the Sharks season?
Not only that, but I was cleaning out my linen closet and pulled out a Sharks beach towel I had bought back in 2016 and never used and then asked my son if he wanted it, as I hardly ever go swimming anymore, especially in the surf ... and do you wonder why?
The world does seem to have a dark sense of morbid humour indeed  ... to me anyway.
Hulk Hogan Hired Them When Milely's Wrecking Ball Was Popular?! 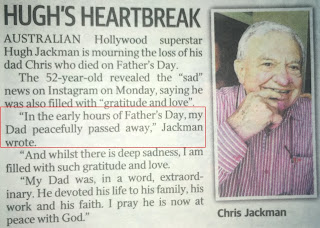 And more tragic Father's Day news in Tuesday's newspaper with Hugh Jackman revealing his father passing away on Father's Day.
The Missing Synch?
Posted by Brizdaz (Darren) at 9/11/2021 05:42:00 PM