A Bluey Thanksgiving in Oz🌏🌎?🦃 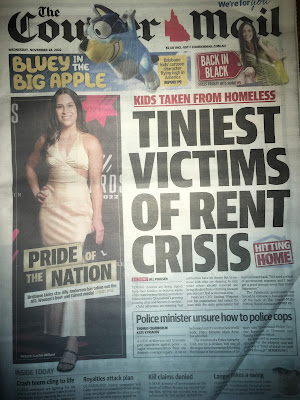 We don't have a day like Thanksgiving in Australia, apart from the now controversial 'Australia Day', which I don't mind for an excuse to get together with friends and family for a meal and a drink, but others here don't like it and don't want to celebrate a day they see as an invasion day celebration ... which I get to some degree, even though I don't celebrate the day in those terms, I just see it as a day to celebrate a country I've grown up in and love with like-minded friends and Aussies.
But it would be nice to have a separate day to get together to celebrate thanks and the end of the harvest season too in Oz, I think.
Although our Australian harvest festival /dinner celebrations would have to be 6 months down the calendar from the American time to celebrate such a get-together I would imagine.
Apparently, we do celebrate "Black Friday" now though? 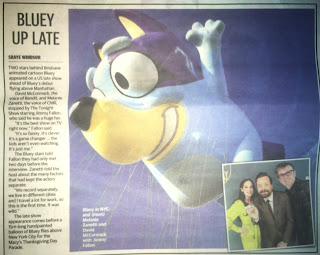 I don't know why the Australian government didn't try to snag Bluey (or pay Disney) to use in tourism adverts to sell Australia to the world, rather than some dumb animated kangaroo paired with an animated unicorn[?!].

I for one would be thankful if Australia could get its act together to celebrate some National Day of Thanksgiving in an Australian, and not an American way.
At least we have Christmas and New Years for family get togethers at this time of the year in Oz ... but no snow in summer to dream of down here:-)
Blue Christmas?🎄🐦
Posted by Brizdaz (Darren) at 11/26/2022 09:57:00 AM