I was surprised to see that the Japanese Gardens on my kitchen calendar weren't in the Brisbane Botanical Gardens like I first thought, but in the city of Ipswich instead.
I never even knew Ipswich had Japanese Gardens ... until now.
At the End of My 2020 Calendars ... What Now?

Bit of a coincidence that Ash Barty would win Wimbledon in July of 2021 and then head off to Japan to play tennis for Australia in the Olympics. 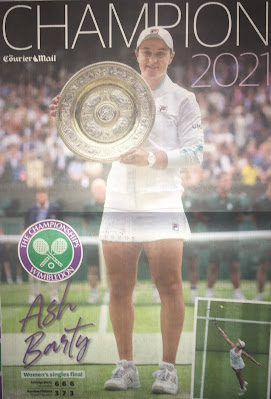 And tonight Brisbane finds out whether we will get the 2032 Olympic Games.
GAB[B]A: Grounds for Celebration?
Personally I hope not, as it means my favourite football stadium would be ripped down and re-built for the games.
Fingers crossed ... that we don't get the games, I say.
UPDATE: July 22, 2021Brisbane announced as 2032 Olympic Games host city at IOC meeting in Tokyo
Posted by Brizdaz (Darren) at 7/21/2021 03:57:00 PM