I’ve never been into Winona Ryder’s movies much when growing up in the 80s and onward, even though I do own movies she starred in like ‘A Scanner Darkly’ and ‘Dracula’ (which turns 30 years old this year), but I don’t own them because she starred in them.
After I finished watching ‘Stranger Things’ season 4 and hearing how it was her influence to get Kate Bush’s song ‘Running Up That Hill’ into the show as a pivotal song for season 4 I started researching her acting career through the decades and must say that I was strongly surprised when reading the trivia section at her IMDB page and then seeing Chris Knowles from ‘The Secret Sun’ blog, who often refers to Ryder as his little Noni and writes on his blog how much of a crush he “used” to have on her, telling William Ramsey in the You Tube below why he thinks the WM3 did it;-)
I only ever watched ‘Stranger Things’ because Chris used to rave on at his blog just how good this show was.
It used to be fun reading his blog back in those days when I thought he didn’t take himself too seriously ... but maybe I was wrong all along about him back then, as he sure seems to take what he says these days rather seriously, which is a bit of a worry methinks ... because I can’t take a lot of what he says seriously even if he may be right about the WM3.
Apparently he and Noni don’t see eye to eye over the WM3 verdict, but they both love the Cocteau Twins.
Noni even starred in the movie ‘Mermaids’ and has aqua-phobia according to her IMDB trivia page ... which I guess means that she is either afraid of water or hates the band Aqua:-)
She doesn’t mention she shares October 29th as a birthday with Josef Goebbels in that trivia interview below, which is rather synchy when it comes to wondering whose propaganda to believe when it comes to knowing the truth behind the WM3, hey Chris?-)
I'm on the board of human rights organizations. One is for the West Memphis Three. We have to get these kids out because they are innocent. It's about justice. We have finally got permission to do a DNA test, which should have been automatic in the first place but was denied. There were so many inconsistencies in the case against them dental impressions didn't match the three boys in prison. But the trial happened so fast - the state wanted a result. Right now, they are saying DNA has been tampered with and is not admissible as evidence. It's a catch 22 situation. The case needs serious funding. It's a gross miscarriage of justice, I hope to see them freed soon.
Strange Phenomena? 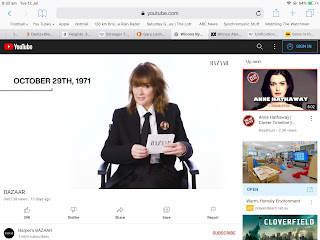 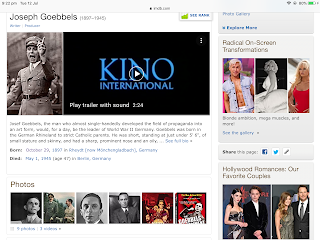