I must admit to never being that much of a fan of Kate Bush’s music growing up in the early 80s as a teenager, apart from studying her fine form in music videos:-)
But after watching season 4 of ‘Stranger Things’ (I still have the last episode to finish ... I’m halfway through at the moment) I did a podcast search in Apple Podcasts for Kate Bush and found one called ‘Strange Phenomena’  that works its way through all her songs, with me not realising that it was actually the title of the third track off her first album, ‘The Kick Inside’ and not a tie into the Netflix show which has made her music chart all over the world in 2022, and sounds to me from the lyrics that the song is about the phenomena of synchronicity/meaningful coincidence:-)
The only track off that album I’m familiar with is ‘Wuthering Heights’ which is based on the famous novel by Emily Bronte, which I have never read, but my book angel sure seems to want me to read ... not that I have the book laying around my home.
From Brontë Country to a Byron Bay Brewery Tour?
And doing a Wikipedia search on Kate and Emily, I see they both share July 30th as birthdays.
I just wonder how much influence that coincidence had on Kate and her life track in the recording industry?-)
Running Up That Hill to Wuthering Heights ... and Don’t Give Up? 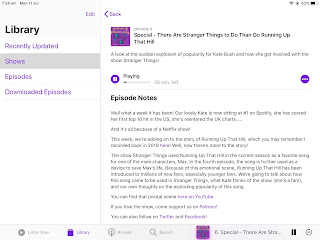