A Very Dark and Tragic 2019 Coincidence? 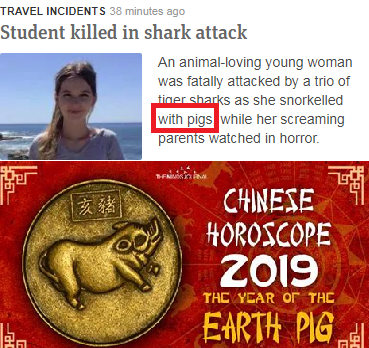 I couldn't help but think of Jake Kotze's Instagram post from the beginning of the year when I saw this tragic shark attack story about a girl swimming with pigs in the Year of the Pig being killed by sharks -
Student, 21, killed by three tiger sharks while snorkelling with iconic wild pigs in the Bahamas
It just highlights that not all coincidences in life are good ones and tragic stories like this one do nothing to alleviate my fear of swimming in the ocean.
The "experts" will  tell you that you have a better chance being hit by lightning than getting killed by a shark, so what are the odds of getting killed by a shark while swimming with pigs in the Year of the Pig I wonder? 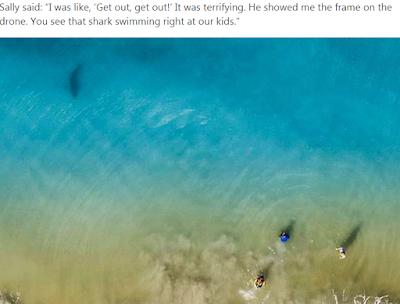 Terrified dad playing with drone spots shark swimming towards his kids
"A dad who sent up a camera drone to snap his young children playing in the sea was horrified to see a shark swimming towards them.
Dan Watson told how he and wife Sally screamed to their youngsters to get out of the water immediately after spotting the creature’s distinctive shape.
The professional photographer said: “As soon as I got the drone in the air I saw a shadow moving through the water towards them.
“It was too close an encounter for my liking.”
Sally said: “I was like, ‘Get out, get out!’

It was terrifying.
He showed me the frame on the drone.
You see that shark swimming right at our kids.”
Dan, who had taken his family on the day out near their Florida home, said of the drone:
“It’s now coming with me to every beach day.”
Florida, visited by up to a million Brits each year, has a high proportion of shark attacks.
Half of the 32 incidents in the US last year were there.
It has had 827 unprovoked attacks since 1882, says the International Shark Attack File."
1+8+8+2=19