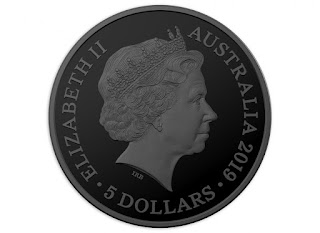 I saw that the Australian Mint were offering $5 black coins for
$140 a piece for a limited time only, with the Queen's head on one side and a couple of extinct ... and one once thought to be extinct, Australian native animals on the other side -

New release of black nickel and selectively gold plated coins
"“The Echoes of Australian Fauna series highlights our expertise in creating evocative and engaging coin designs.
We are honoured to have the opportunity to share this beautiful new Australian fauna series with international collectors and the numismatic community at the 2019 Berlin World Money Fair,” said Mr MacDiarmid.
The black nickel plate accentuates the mysterious and primordial nature of the landscape while the selectively gold plate, alternating with the black nickel, provides a beautiful contrast showcasing these unique and elusive creatures.
The limited production series will feature three 2019 $5 Nickel Plated and Selectively Gold Plated Fine Silver Proof Coins and the reverse of each coin will feature artwork of a different Australian animal including the extinct Tasmanian tiger, the extinct lesser bilby and the night parrot.
The obverse of the coins feature the effigy of Her Majesty Queen Elizabeth II, as sculpted by Ian Rank-Broadley.
‘Benjamin’, the last known Tasmanian Tiger, died on 7 September 1936 at Hobart Zoo.
The lesser bilby was an inhabitant of Australia’s driest deserts, and recorded as a living animal on just a handful of occasions between its discovery in 1887 and its extinction in the 1950s.
The Night Parrot is a small ground-dwelling nocturnal parrot only found in Australia.
Until very recently it was through to be extinct – with no confirmed sighting of it for over a hundred years.
All of the coins in the series are Australian legal tender and they are available in a limited mintage of 5000, retailing for $140.00 (AUD).
The Tasmanian Tiger coin is the first of the series available for purchase on 4 March, the Lesser Bilby coin will be available on 6 May and the Night Parrot will be available on 15 July from the Mint’s online store" 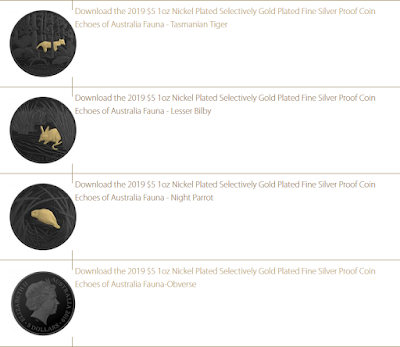 I don't think I would think this was a great omen if I was the Queen, especially at her age.
Money - Pink Floyd from the Dark Side of the moon
Get away You get a good job with good pay and you're okay Money It's a gas Grab that cash with both hands and make a stash New car, caviar, four star daydream Think I'll buy me a football team Money Well, get back I'm all right Jack Keep your hands off of my stack Money It's a hit Don't give me that do goody good bullshit I'm in the high-fidelity first class travelling set I think I need a Lear jet Money It's a crime Share it fairly But don't take a slice of my pie Money So they say Is the root of all evil today But if you ask for a raise It's no surprise that they're giving none away