The Comet is Coming? 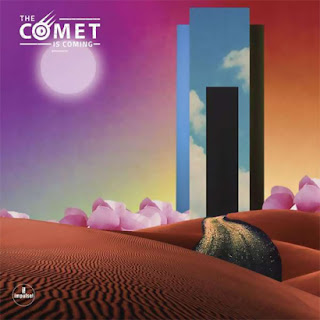 'The Comet Is Coming' is a London-based band who incorporate elements of jazz, electronica, funk and psychedelic rock.
I had not heard of this band until a day or two ago when I heard one of the 'Real Wisdom' guys telling the 'Future Thinkers' guys in the You Tube interview in the post in the link below how they really like this band and how they would like to interview the saxophonist -
The Intellectual Deep Web, Future Thinkers & Rebel Wisdom? 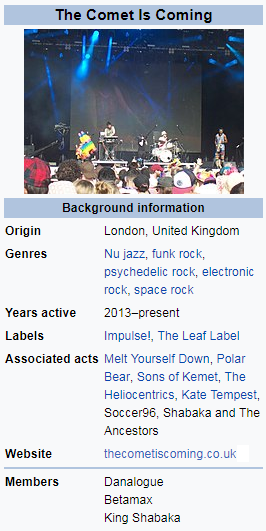 I can't say that I'll be throwing out my 'Pink Floyd' albums just yet after having a listen to a few of the Comet is Coming's tunes on You Tube, but I did find some infomation at their Wikipedia page a little eye opening and wondered just what it is they were channeling exactly?
For instance, "their debut EP Prophecy was released on limited edition 12" vinyl on 13 November 2015, with the full-length album Channel The Spirits following on 1 April 2016.
Channel the Spirits was nominated for the 2016 Mercury (the god of financial gain, commerce, eloquence, messages, communication {including divination}, travelers, boundaries, luck, trickery and thieves; he also serves as the guide of souls to the underworld?) Music Prize and in 2018 the band signed to Impulse! Records."

November 13th, 2015 would have seemed like the final days of the apocalypse too I'm sure if you happened to be on the street that night. 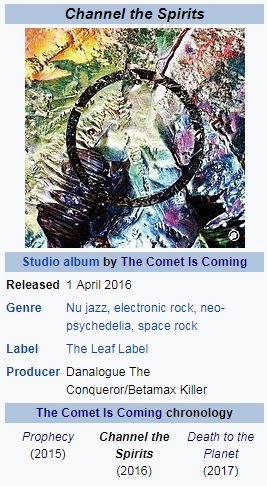 And exactly one month before the Notre Dame fire of April 15th 'The Comet is Coming' released their album
'Trust in the Lifeforce of the Deep Mystery' with the track 'Summon the Fire' one of the main tracks off it.

A Hell of a Coincidence, Too? 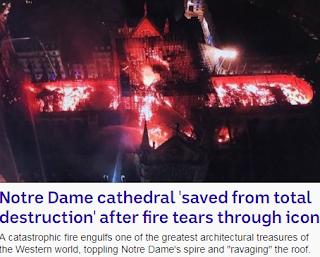 I guess that should keep the conspiracy theorists busy until the comet hits.
When's the next album coming out again?-)
With this band's past track record my guess would be if
the comet is coming it is going to hit Paris for sure.
Posted by Brizdaz (Darren) at 7/15/2019 09:46:00 PM