Cities as Habitats, Structured and Unstructured Creation, and the Role of Visual Presentation? 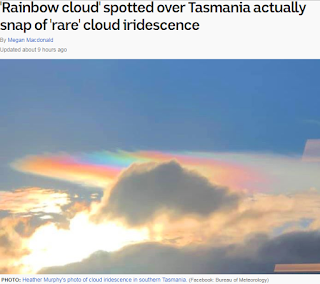 I listened to Gordon White's latest podcast interview with Zola Jesus today at the 'Rune Soup' You Tube channel and then I saw the above news story on the ABC news website about a "rainbow cloud" photographed over Hobart, which is not too far away from where Gordon's farm is, as far as the crows fly.
Is cloud iridescence rare?
TALKING CREATIVITY AND PLACE WITH ZOLA JESUS
I wrote a post a few weeks ago featuring a You Tube of Gordon's neighbour paying him a visit to his farm when a double rainbow appeared in the sky, although Gordon didn't seem too impressed by it.

Pagan Tasmanian 'Pub Moots' and Uncanny Meetings?
The double rainbow over Gordon's farm is at the 13 minute mark of the video below.

I was nearly going to go to Dark Mofo last year and see Zola Jesus, not that I had heard any of her songs, but Chris Knowles from
'The Secret Sun' said Zola would be worth checking out if I went down to Dark Mofo that year. 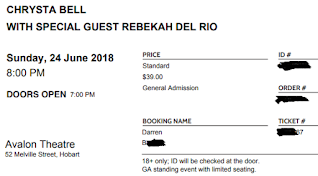 I had already bought a ticket to see Chrysta Bell on June 24th, 2018, but the stars just weren't lining up for my trip to Tasmania that year, so I didn't go.
Nor did I sell or give away the ticket.
Such is life, as Ned Kelly said when things weren't going his way, too.
I like spending time down in Hobart around Dark Mofo time, because the city is always very well visually presented to us visitors.
My Pick of Dark Mofo Would Have to be Chelsea Wolfe 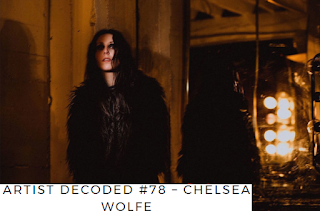 Chelsea Wolfe: Funeral in Vegas?!
Oh well, maybe I'll get down there next year and do some
cloud spotting myself? 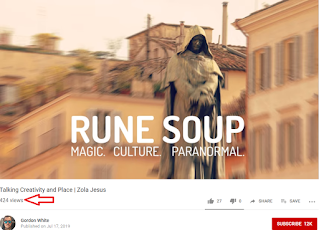 And there was 424 views when I watched/listened to the Zola Jesus 'Rune Soup' You Tube, which is something I find personally synchy when I see that number, as regular readers would know.
I think I actually said "Jesus!" when I saw that view count and I'm not a religious person really.
I've got say though that while I am yet to see a "rainbow cloud" I have seen my far share of double rainbows around where I live -
Magda Szubanski, Rainbows, The 2016 Byron Bay Writers Festival, Jung and Synchronicity
Back, After the Break ... LIVE?
Posted by Brizdaz (Darren) at 7/18/2019 11:56:00 PM