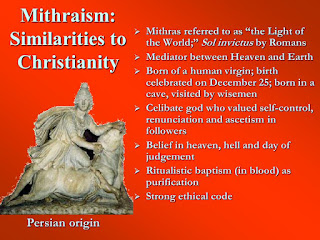 An interesting talk at the 'New Thinking Allowed' You Tube channel about Mithraism, I think -
"Jason Reza Jorjani, PhD, is a philosopher and author of Prometheus and Atlas, World State of Emergency, Lovers of Sophia, Novel Folklore: The Blind Owl of Sadegh Hedayat, and Iranian Leviathan: A Monumental History of Mithra's Abode.
Here he describes the complex relationship between Mithraism and Zoroastrianism.
Over time, each of these traditions have incorporated the other, while also standing opposed to key principles in the other.
The god, Mithra, is typically symbolized slaying a bull -- and is considered to embody a consciousness beyond the restrictions of time and fate.
At one time, Mithraism was the dominant religion of the Roman army.
Jorjani speculates that Constantine made Christianity the Roman state religion as a response to the threat he saw posed by Mithraism."
Posted by Brizdaz (Darren) at 9/23/2019 06:07:00 PM