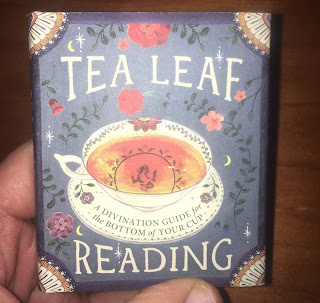 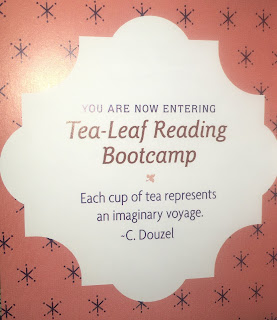 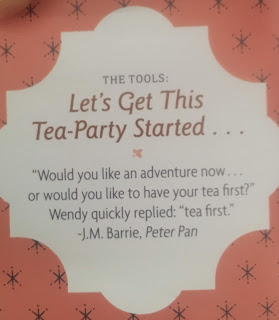 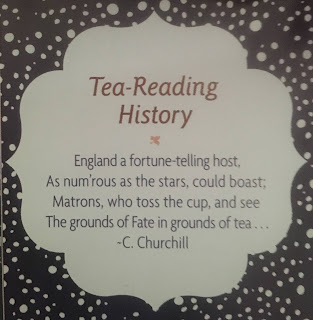 I bought a small book called 'Tea Leaf Reading' a while back from a shop that sold a great deal of tea leaf reading tools and paraphernalia. 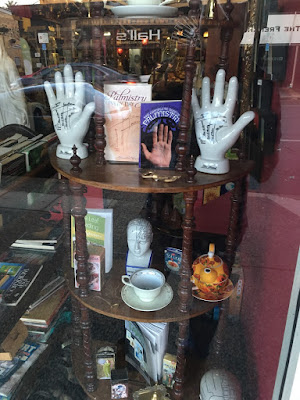 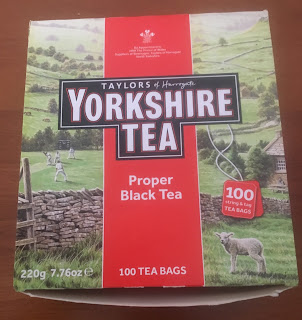 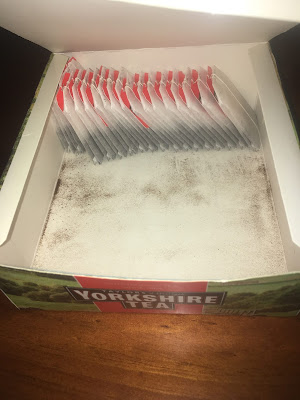 My goal was to get myself to drink more tea, instead of drinking so much coffee, rather than to become some tea leaf reading psychic.
Although once I used up my packet of loose leaf tea, I bought tea bags for making my cups of tea, as I got sick of the mess loose leaf tea made, which of course meant reading tea leaves was out once I made the switch to tea bags.
I bought the above box of 100 tea bags last year and am still going, which is how much I like tea over coffee.
I did have a tea cup like the one above that the British lady is doing a reading from, but I ended up giving it away to my sister, as I soon got tired of staring at tea leaves in the bottom of a cup -
Put the Kettle on: Tea, Coffee or Signs? 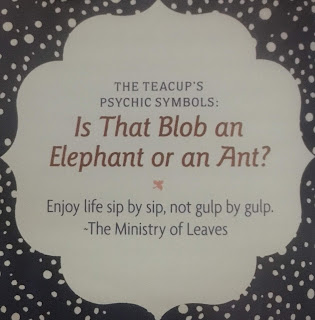 But I thought I'd read the little book I bought last year before giving that to my sister, as well.
I think I more or less bought the book for nostalgic reasons, as when I was a child of around six my grandmother would take me to tea reader's in the city with her, where gran would feed me sandwiches and a cup of tea and then get our cups read by the nice, but usually deluded readers who would tell us vague and pretty common generic things that would be bound to happen to anyone in their near future.
Even as a child I could read these ladies better than they could read my tea leaves.
But I was curious as to just what they were meant to be looking for in the cup and how they "read" it, because they seemed a little illiterate if they were reading my future I thought.
They were about as vague as the lady in the above You Tube and their thick British accents were about as easy to understand as her's, too.
Still it was fun to believe that people could ... or they thought they could ... read your leaves and tell you your future.
The Turkish coffee reading above is more my cup of tea, so to speak;-)
I've got to say though, have you noticed how many creepy tea drinking scenes are in scary movies lately, like in the trailer below?
IT's Not a Good Sign, Too? I've actually got a future post planned relating symbols I found in the 'Tea Leaf Reading' book to objects and possible meanings in the movie 'The Shining'.
But what I found interesting in the 'Tea Leaf Reading' book was this passage -
"Like in centuries past, today's clairvoyants and crystal-ball readers (AKA scryers) regard tea brewed from the leaves of the mugwort plant as the best drinkable e.s.p.- catalyst on the planet." 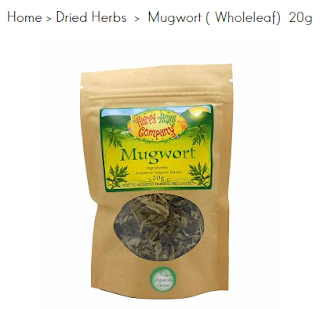 Mugwort tea was usually drunk before divination rituals and also burnt as a ‘transporting’ incense. Also known as the visionary herb, Mugwort is still used today for increasing psychic powers.

Native Americans also burned Mugwort as a ‘smudge’ to purify the spiritual and physical environment.
The herbal tea was, and is still used by women for late periods (and, as it relaxes the uterus, also for natural terminations without the trauma, pain or guilt – it was just a late period!).

THEREFORE PREGNANT WOMEN MUST NEVER USE MUGWORT OR BE IN ANY CONTACT WITH IT!

In modern herbalism, Mugwort is used to stimulate and ease menstruation, assist digestion and liver function, expell parasites and relax the nervous system.

The leaves may be smoked for a dreamy, relaxed effect. Mugwort may be smoked or drunk as a tea at night to induce colourful and lucid dreaming.
Also placed under pillow slips for astral traveling and fanciful dreams.
Maybe I'm going to have to get some mugwort tea and do some dreamy readings on myself?
But tea drinking can send you loopy, so be careful, or get out would be my advice:-)
Posted by Brizdaz (Darren) at 9/09/2019 08:35:00 PM